Speaking of which, I’m just a fascinating pedestrian wandering the beautiful beaches of the boundless sea of language and literature.Inspired by his natural creation tendencies, of course, some ink has dripped from the pen and has also gained a little recognition as a creative creator. But I am not a critic of literature.Yet as an ordinary, sympathetic reader he has attempted to discuss some of his own experiences and judgments from his point of view and the literature and its creators and their creation.The result of that creative effort of mine is ‘Literature: Power and Form’. It includes a review of some of his references to literature, his own memorable relationship with the creators, and their creation.I am grateful for the support and advice I have sought from the well-wishers and co-workers in this great work of mine, and who have enthusiastically encouraged me with their thoughtful opinions and comments.They are Dr. Balaram Das, Veteran Professor and Poet and Critic of Oriya Language Literature, Dr. Pramod Kumar Parida, Dr. Satya Patnaik and Ramesh Das.

I would like to thank the editors of all the magazines who have shown the kindness of putting my discussions in their magazines.Finally, I would like to thank my dear publisher, the renowned creator of spiritual literature, Shri Narsingh Prasad Mishra, who has put his stamp on this book by expressing his faith in my literary identity.I would be happy if ‘Literature: Power and Form’ could shed some light on the general readers, students, researchers, and critics of literature. 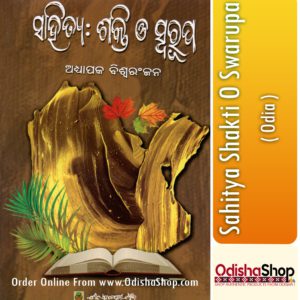