Odia Book Rasakallola, that is ‘The waves of Rasa’, was written by Dina Krushna who belonged to the Atibadi sect of the Vaishnavas and lived at Puri in the later 17th and early 18th century (approximately from 1650 to 1710). Rasa kallola is one of the finest specimens of ornate poetry and one of the very best in ancient Odia literature. Its musicality is immense, and moving away from contemporary Sanskrit domination, it used contemporary Odia language in a contemporary context as few kavyas have done in Odia literature. Following the Vaishnavite tradition, the book deals with the traditional story of Radha and Krishna and the manifold aspects of their love along with Krishna’s association with other gopis too, described in extremely lucid as well as realistic details of life.

It may be said that Rasa kallola is an important poetical’ work of sustained vigour, great structural skill and immense metaphysical force. Each line begins with ka throughout the book. The entire kavya is divided into 34 chhandas (cantos) and each chhanda is organized in a musical metre with vivid description of natural beauty such as the description of seasons in relation to the delicate and unmatched feminine youth and elegance of the women folk (gopis) of Gopa-pura. Besides figures of speech, such as alliterations, assonances, similes and metaphors, etc. each stanza in the kavya is packed with a number of poetic devices. The first chhanda is devoted to the praise of Lord Jagannath and adoration of ancient scholarship. The emergence of Lord Krishna in the second chhanda, the enchantment of gopis at the news of the birth of Krishna in the third, the episode of Putana in the fourth, the description of the childhood of Krishna in the fifth and the sixth, the passionate romance of Krishna and gopis in the seventh and the eighth, the subduing of the Serpent Kaliya in the ninth, and the appearance of the amazingly charming Radha in the tenth chhanda constitute the first phase of the kavya. The description of seasons, such as winter, spring, summer, rains and autumn in succession and the corresponding response of love-soaked Radha and gopis make the enriching contexts of the subsequent chapters. The amorous love-play of Krishna with gopis and his thrilling love-play in the company of Radha make up the nineteenth and twentieth chhandas. The subsequent three or four chhandas are devoted to the same erotic descriptions of ‘Shringar rasa’. The journey of Krishna to Mathura, the sorrow and agony of gopis at the separation of their lover, the delight of the women of Mathura at the sight of Krishna, the killing of Kansa, Krishna’s sympathy with his aunt and his love-play with Kubuja, the bemoaning of gopis, the arrival of Udhab in Gopa-pura etc. occupy the rest of the chhandas. The dialogue between Udhab and gopis, and the exposition of the philosophy of love and devotion by Udhab in the thirtysecond and thirtythird chhandas highlight the importance of the philosophy of Vaishnavism and the essence of the worship of Radha and Krishna through knowledge and devotion. The last, the thirtyfourth canto, relates how Udhab returned to Krishna and conveyed to him the deep concern and anxieties of gopis at the separation of their lover, Krishna. Briefly, it may be said that the poet in Rasa kallola laid emphasis on the total surrender of the devotee to the divine-being for ultimate bliss and deliverance. The theme of Radha and Krishna had attracted many medieval poets in Indian literature and Dinakrushna Das in Odia poetry was one of them.

The chief merit of Rasa kallola is the pervading tone of devotion and romance. Emotion and romance underlying devotional feelings add to the precision and perfection of a poetic diction, and on the whole Dinakrushna’s powers of narration and observation are superb. In addition, there are several stanzas which spell out the characteristics of poetic craftsmanship and the true virtues of a poet with some commitment. Complete merger with the divine is the common phenomenon’ of Vaishnavite love as manifested in the life of Krishna, gopis and Radha. Rasa kallola, remarkable for its diction, creative imagination, poetic flashes and classical quality, ranks high among the medieval Odia kavyas and it brought a measure of stability to the literary landscape of medieval Odia literature.

This book is edited by Dr Surendranath Panigrahi and released it’s 1st edition in 2020. 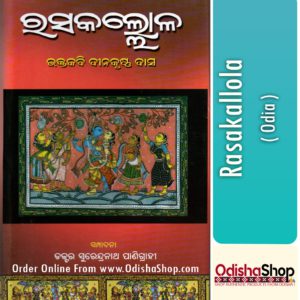