in stock
SKU: OSBKS-GMPSD-2053
Product by: Grantha Mandir
Write a review
Our Price

‘History of Oriya Literature’ (Author: Pandit Suryanarayana Das) is recognized and admired as an authentic book for the study of Oriya literature. The book was also awarded by the Central Literary Academy Four parts of it were published over time.The four parts of it also became mischievous at one time after another. Reprinting was not possible due to various adverse effects. Even now, despite the presence of that adverse pressure, we have tried to reprint it as soon as possible with a resolution in mind.We hope that by publishing these four sections by 2002, we will be able to solve the problems of students, teachers and researchers.

The introduction of ‘Introduction to Oriya Literature’ was very briefly written but it was revered by the literary lovers of the country. Encouraged by that enthusiasm, I dared to publish this book, which contains a detailed discussion of Oriya literature.It is expected to end in two or three parts like this. I have been forced to accept a lot of time and labor to compile this book by collecting content.Yet I couldn’t pay attention to all aspects as I had been suffering for a long time during the book printing. It is possible that this has been misleading. This is the prayer that the pure-hearted writer will know by the work of the “pure and pure.” 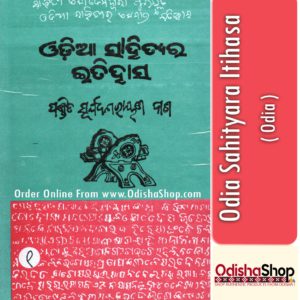