The meaning of ‘culture’ is broad. It is closely related to history, archeology, history and tradition. Culture blends well with the backbone of the nation. Every society has a certain culture behind it.Body, mindfulness, restraint everywhere is asceticism and this asceticism is culture. Truth, moderation and honesty are the key to this culture. Culture is associated with the meaning of civilization. So in the long history of every nation we will meet the civilization of that country.The culture of that country largely depends on the religion, philosophy, history, traditions and geographical environment of the country. Culture represents the fullness of human life. It also purifies the regime. Culture inspires a person during anarchy. Spiritual ideals make the path of culture clear. So on the whole culture is the seed mantra of the nation and the country.

A branch of culture is folk culture So in order to identify a nation, it needs to study its folk culture. Out of this folk culture, the image of that country, that nation’s culture, its principles, its ideals, its traditions, its history, its happiness, its sorrows, its beliefs is refined. Introspection in society is evident from public life. And public life is waiting for folklore. Many stages of folk culture are visible.The breadth of people’s lives can be deduced from this.It reflects the laughter, beliefs, practices, customs, traditions, legends, customs and practices of the people. It accelerates the attire, food, customs, language and beliefs of the people living in a particular area.

Folklore has flourished with various branches, such as: folk songs, folk tales, folk dramas, na’dia, dhagaumali, puzzles, proverbs, discourses and rudhi. These can be derived from language, society, and the country’s customs, attitudes, and various theories.In this regard, the late Gopal Chandra Prahraj, an eminent researcher of folklore, mentions in the preface to his compiled book ‘Oriya Secular Position or Dhagadhamali Bachan’-“One of the peculiarities of the nature of human nature is that a theory or doctrine or principle is told only in words, so that the truth or doctrine is not written in the mind of the listener, but in the heart, in the heart of the listener. Realizing this mystery of human nature, scholars, sages, gurus, poets, and the elderly all over the world have always given gifts to society in the form of proverbs, discourses, and verses. ” 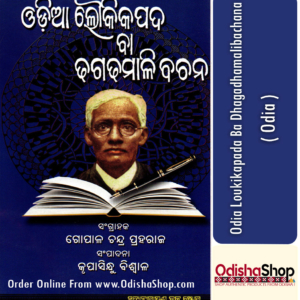