SKU: OSBKS-FPPSD-2002
Product by: Friends Publishers
5.00 out of 5 based on 1 customer rating
Write a review
Our Price

Indian Hindu culture is mainly divided into four parts, Such as (1) the original culture of the pre-Vedic Anaryas (2) the Vedic culture established by the Anaryas after the Anaryas victory (3) the anti-Vedic Jain and Buddhist culture and (4) the pre-Vedic idol-mythological culture.But a closer look reveals that there is another basic culture called Jagannath culture. It has its own characteristics.So various societies and devotees such as Vaishnava, Shaiva, Shakta, Buddhism, Jain, Arya, Anarya and Dravidian have accepted Shri Jagannatha as their deity. The root of this culture is the ‘universal world’.So here the Mahar and the Maharaja are all the same. For this reason, Shri Jagannatha is the deity of all the Hindu worlds. The fact that so many historical facts books have so far been published in Oriya, English and Bengali on this culture or Jagannath religion and temple cannot be said to be complete.This ‘Jagannath Temple and Jagannath Theory’ book, written by the historical scholar Suryanarayana Das, is another great step in this direction. It will provide the reader with as much information as it will be a guide for future researchers.

Mr. Pandit is a well-known writer and researcher in Oriya. Of his many research books, the Sri Jagannath Temple and the Jagannath Theory have already been published. Now he has presented its refined and expanded edition to the readers.This book contains information about the identity, establishment, Jagannath theory, Jagannath’s history, Jagannath and Buddha, the daily policy of the temple Thakurs, the pilgrimage, the time of temple construction, the transcendence, the circuit, the scriptures in the temple, and the scriptural community.In it he has made the book beautiful by giving some evidence and examples of Vedas, Vedanta, Upanishads, Puranas and Mahabharata.There is no doubt that Pandit Mahasaya has been commended for writing such a research history of the Shri Jagannath Temple. The layout and cover of the book are beautiful.

Devi Mishra
Rated 5 out of 5
This is one of the best book with complete information on lord Jagannath.
Helpful?
0 0 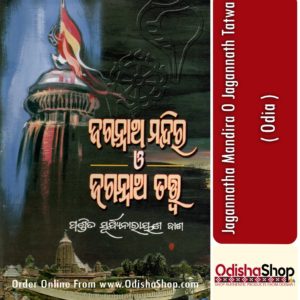