The historical development of Oriya literature from the time of its birth to the present day is summarized in this discussion book. The first chapter deals with the history of Odisha, the Oriya language and the Oriya script, which can also be considered as an introduction to the book. Age-division is a big problem in Oriya literature. There are a number of literary figures in modern times who compose poetry in the context of contemporary literature. Their writings are ritualistic in terms of literary philosophy; But their births are modern, and their writings are modern. In the same way, modern literature, like sixteenth-century saints, is emerging in modern times. It is convenient to introduce the literature that is created within a certain period of time according to the name of the age concerned; The book focuses on this. Although I have followed many historians of Oriya literature in the past, I have followed in my own footsteps and pointed out the reasons for this.

Another problem is that some of the controversies such as “Kalasa Chautisha”, “Keshab Koili”, “Rudrasudhanidhi”, etc. are timed to ancient writings. These have been accepted by many scholars as pre-classical compositions. And again, these would mean that you have to spend for these processes. I have analyzed the views of both groups and placed each discussion in a separate chapter in a timely manner.

The book focuses on the development of Oriya literature, which has been made possible by many writers, both major and minor. Like mainstream writers, secondary writers have a role to play in guiding Oriya literature on the path of development, some more and some less. No matter how little he wrote for Oriya literature, he was my friend, relative; How can he be ignored? I did not forget to list some of their works where necessary, even though the book deprived some of their work of a complete analysis due to the age-old fear of the unexpected caliber of the book. Nonetheless, be it major or minor, there is no doubt that some talents have not come to the forefront of the discussion in my view. It is not my ignorance, it is not ignorance or neglect at all. Due to the increase in the size of the book, it has not been possible to discuss in detail the various aspects of Oriya literature in Oriya children’s literature, Oriya translation literature, Oriya tourism literature and Oriya character literature. During the preparation of this book, I have had to resort to the writings of many well-known writers and critics. At the end of each chapter, I list the authors and acknowledge the role of the author (s) in the publication of the prepared book.

Be the first to review “Odia Book History Of Odia Literature By Dr. Surendra Kumar Maharana From OdishaShop” Cancel reply 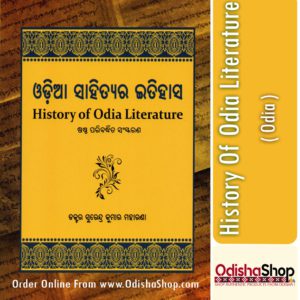