SKU: OSBKS-BKCRR-9075
Product by: B K Classics
Write a review
Our Price

In our country, the central government honors people who have made outstanding contributions to the arts, literature, science and social work at the national level. The Bharat Ratna is the highest civilian honor among civilian honors. This honor cannot be used as a title. So they are considered the most respected people in the country. The award was established by the First President of India, Dr. Rajendra Prasad, on January 2, 1954. He was also awarded the titles of Padma Vibhushan, Padma Bhushan and Padma Shri. The Bharat Ratna award was adjourned from 13.7.1977 to 26.1.1980.

So far, the award has been presented to four great people. The list includes two non-Indians and one foreign national with Indian citizenship. The state has won the highest number of awards from the state of Tamil Nadu so far and six from Uttar Pradesh. The award plaque is now in the form of an Ashwatath leaves. It contains the Bharat Ratna in the Devanagari script. On the opposite side are the national emblems and policies. It is tied to a ribbon 2 inches wide and hung around the neck of the award.

The first Bharat Ratna award was given in 1954 to anyone who died. Probably a factor as to why they’re doing so poorly. The death penalty was later passed in January 1955. As a result, 12 celebrities were posthumously honored. Even in 1992, a proposal was made to award the award to Netaji Subhas Chandra Bose. But the prize was reimbursed for some legal issues. This is the only exception in the history of awarding the Bharat Ratna. There is no mention that a person must be an Indian citizen to receive the Bharat Ratna award. The award was given to Mother Teresa, who became a naturalized Indian citizen in the 1980s, and was given the award to both non-Indians, Khan Abdul Gaffar Khan in the year 1987, and Nelson Mandela in the year 1990.

Indian freedom fighter Netaji Subhas Chandra Bose is known around the world for his radical nationalism. In 1992, it was announced that he would be awarded the Bharat Ratna posthumously. However, a public interest litigation has been filed against the announcement by some institutions related to Subhas Chandra’s memory. The court ordered the award to be revoked as the award committee was unable to provide any satisfactory evidence of Subhas Chandra Bose’s death.

India’s first education minister, Abul Kalam Azad, refused to accept the Bharat Ratna award. “It simply came to our notice then. The award was later presented to Abul Kalam Azad in 1992.

Be the first to review “Odia Book BHARATARATNA By Dr. Rabinarayan Rath From OdishaShop” Cancel reply 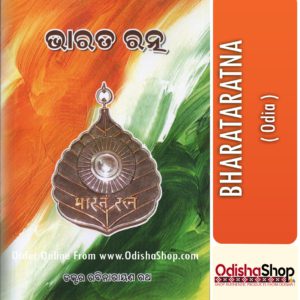