in stock
SKU: OSBKS-FPRR-2050
Product by: Friends Publishers
Write a review
Our Price

Chilika, a long, descriptive poem (750 lines), based on the lake Chilka, adjoining the Bay of Bengal, in the eastern coast of Odisha, was published in 1892 and written by Radhanath Ray (1848-1908). It was dedicated to Sri Ramchandra Bhanja Deb, the then King of Mayurbhanja, an ex-feudatory state of Odisha, and the poem also ends with a reference to the same king by name who has been spoken of as the destroyer of gloom of illiteracy in Utkal (Odisha). The poem consists of end-on rhyme couplets, and each line consists of 12 letters. The structure is generally musical and the language is a combination of Sanskrit-based words with colloquial words, and emphasis on the former. A large part of the poem is given to an account of Chilka, its vast expanse of blue water, varying vegetations, innumerable fishes, numerous types of birds many of which come to Chilka every year from distant lands, its islands, forests and many’ rivers that flow into it as well as the villages, places,’ temples and mountains that surround it. Then there are changing pictures of the lake with the change of seasons, as also with the change of hours during the day, with fine pictures of afternoons, evenings and moon-lit nights. ‘Thus this is how the sun sets over ChUb: “Now the Lord Sun sets his golden throne on the top of valley in the west. As the long shadows fallon hills, the yellow turns to blue.

As the cattle return home, the noise of bells round their necks fill the valley and echo in the forest-path. The smoke rises from hamlets below and curls through the forest.” Or the moon-lit night is described as follows- “The white moonlight falls on vast blue expanse of Chika even to the distant horizon. The fishermen’s boats now dot the eastern line, and as they return home from the sea their happy songs float lazily over Chilka. The spirit of the songs moves over blue water and vanishes in white moonlight. AIl around in sweet moonlight the sweet maidens laugh and sing”. Or the account of night is one of quiet and peace- “Now the night has come; the noise is no more; the earth is quiet ….

The chequered forest looks like the body of a snake. The hills and forests are quiet; men do not move; only the cricket sings; only the distant stream murmurs. The night deepens. The peace reigns everywhere”. The poem makes references too, such as to the past glory of Odisha when the ships used to go out from Chilka to distant lands. But it mainly remains a fine descriptive poem, describing nature’s beauties woven around Chilka, the lake, as the central figure, and to that extent it has inspired a whole line of descriptive poems in Odia Literature. 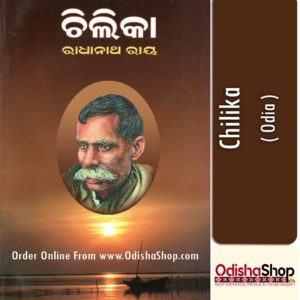