In the second phase of the Oriya Language Protection Movement, which has just started, some scholars say that English and Hindi are obstacles to the development of the Oriya language, while others suggest that it should be emphasized as the language of the Gujarati language. The argument is true. But if these two languages, born many years after the Oriya language, can be a source of income, why can’t the Oriya language take its place? This question has been on my mind many times. It is for this reason that I am especially disturbed by the contemptible attitude of other departments towards students and teachers in the Oriya department.

The only remedy for this pain is to make the Oriya language popular as a means of livelihood. This is why our Oriya students need to take advantage of the fact that other state and central public service commissions have the opportunity to pass administrative exams and staff selection exams through regional languages. But sadly, while the central government has given the opportunity to take this important test in Oriya language, English has become the medium of the test in our state instead of Oriya.It is worth mentioning here that a few years back, the IAS was worried about the decline in the success of the Oriya IAS. He advised the candidates to accept the Oriya subject as an optional letter in the main examination of the exam and the inspector to adopt Kohl’s attitude in giving the number. But he did not recommend writing all the letters of all these tests in Oriya language.But he did not recommend writing all the letters of all these tests in Oriya language. Perhaps they did not believe in the integrity of the Oriya contestants. That is why the candidates of Odisha are being forced to take the state administrative exams through English.Other states are emphasizing regional languages in the exams, but the only state Odisha is forcing its candidates to take exams in foreign languages instead of their mother tongue, depriving them of their basic rights in the field of employment.

So since there is no such specific textbook for the optional letter, I would like to write a book to make up for it. Mishra Publishers Pvt. Ltd., the publisher, gave me the responsibility. Even though I didn’t have the mentality to carry such a guru, my interest in this aspect and some experience and experience has made the book’s calendars pathetic by paying for it.It will not only help the administrative service test contestants but also other major exams and Oriya language and literature researchers to help fulfill the knowledge thirst of the people. Hopefully, the purpose of the book will be fulfilled.In addition, I urge every examinee to take advantage of the opportunity provided by the Union Public Service Commission and the Personnel Selection Commission to conduct the examination in Oriya language, as in other state examinees, and to conduct all these examinations in Odisha through the Oriya language.So the Oriya language, like English, Hindi and other regional languages, can be the language of Gujarati or the threat of Oriya disappearance from Oriya in a very short time will come true. 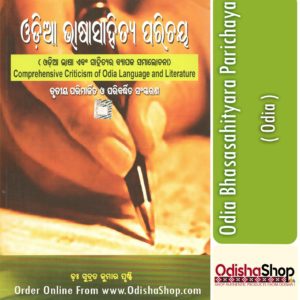