The poet Baldev Rath was born between the eighth and ninth centuries of the eighteenth century AD and passed away in the fifth decade of the nineteenth century.Pandit Kulmani Das has identified the age of Baldev as 1789-1845, while researcher Shri Sachchidananda Mishra has accepted it as 1779-1840.

KabiSurya lived in the modern era or in the British Empire. His literary pursuits were conducted in this English kingdom. Yet he cannot be called a poet of the full modern age.In the same way that we identify the poet Radhanath as the modern poet, Kabisurya cannot be modernized.Yet some of the hallmarks of modernity appear to have appeared in the poet’s literary creation. There is a perception among critics that Radhanath’s literary-creation Western rhetoric takes some modern perspectives on the renewal or simplification of the fold-literary-style.And devotion and religious consciousness in the literature of the great modern poets of Radhanath, Fakirmohan, Madhusudan, Gangadhar are not far from the religious consciousness of the ancient poets.So it would not be an exaggeration to say that modern-day literature flourished in the literary creation of poet Surya Baldev. The poet Surya had a writing in a century.It is true that he has followed the age-old tradition of literary creation; But in some cases, there is a reluctance to do so.He has acted as a successful emotional connection between our ancient literature and modern literature. His all-encompassing wealth is the first light in the rise of modern literature. 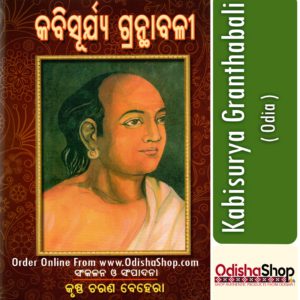